There is no debate about the market share of the map and navigation anymore. Google Maps beat all other competitor by the Android Phone. Apple navigation is some kind of useless in Vietnam, it shows 32minutes for 28km through the centre, Google map tells 1hh15, more feasible. Other competitors have own advantages, Vietmap, Vietbando, Here, sygic, but no one has released the same function based on user collected data, realtime traffic data. 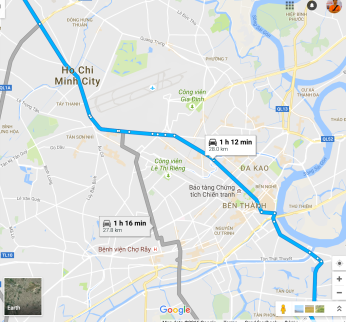 While the traffic data is a useful reference information, we can not rely on this for navigation. Why?  But it still not something that can be used while driving, it’s not safe to check on the screen rather than focus on the road, where any moto-bike might appear from any direction on anytime.

The voice control is just for some one doesn’t know clearly about the city and need turn to turn direction. It doesn’t give any recommendation rather estimation when we arrive.

The traffic in Vietnam is chaos, any algorithm which is success on other places can’t be applied in here. Even Hanoi and Ho Chi Minh City have different driving regulations.

From my point of view, with experience of more than 10 years driving through the city, I have some idea to make a useful local navigation which could help traffic in Vietnam a lot.

What do I need?

I drive a lot. My Moto bike reached 50.000km for 4 years. 35km everyday, just go around the city 🙂 I live in the north of city, but sometime I worked in the south). I knew many route, knew how the city’s traffic growing, and some how, how people driving in the city. I have a good habit, be on time. Based on my experience, I might predict exactly which route I should go to the destination to be on time. But it’s just for moto-bike, I’m driving a car now, there are many factors could affect the journey…

What can I do?

Google can not know the city better than me. Although I can’t not access to the raw traffic data or the Google user history. But I could provide a myself experience based on location history. Use my knowledge of algorithm to help myself to to work. If I’m lucky enough, I could ask my friend from FPT to provide some traffic data based on CCTV, which some kind of a city project.

Let wait what I can do.